The sun shined brightly on Father’s Day at the San Diego Polo Club, and families of all ages celebrated this fantastic day with their loved ones.  Son of our founding father, Willis Allen, flew in 8 antique biplanes and the Wavecrest Woodie Club drove out their prized automobiles for guests to enjoy.  San Diego European brought out Aston Martin to lead the parade of teams with their 2013 Vantage Coupe.

From the east side of the polo field, the huge crowd enjoyed tailgating festivities along with picnic lunches in the foreground of the biplanes and Woodies.

On the west side of the field, VIP  and Player’s Club guests were treated to Woodford Reserve Bourbon tastings and specialty cuisine from The Wild Thyme Company.  Special that day was a steak sandwich with caramelized onions and creamy aoili spread.

But the main attractions of the day were the exciting polo matches. The 1:00pm match featured Sycamore-Monteverde versus Star Meadow-Adeptus. The match ended with a score of 11-8 with Star Meadow-Adeptus taking home the trophies. 3 goal professional polo player Ashton Wolf led his team in scoring with 5 goals and his teammate 5 goal professional Martin Ravina tallied up 4 of his own.

To celebrate Father’s Day, we asked father of Roberto Estudillo, Bobby Estudillo to throw in the first ball! 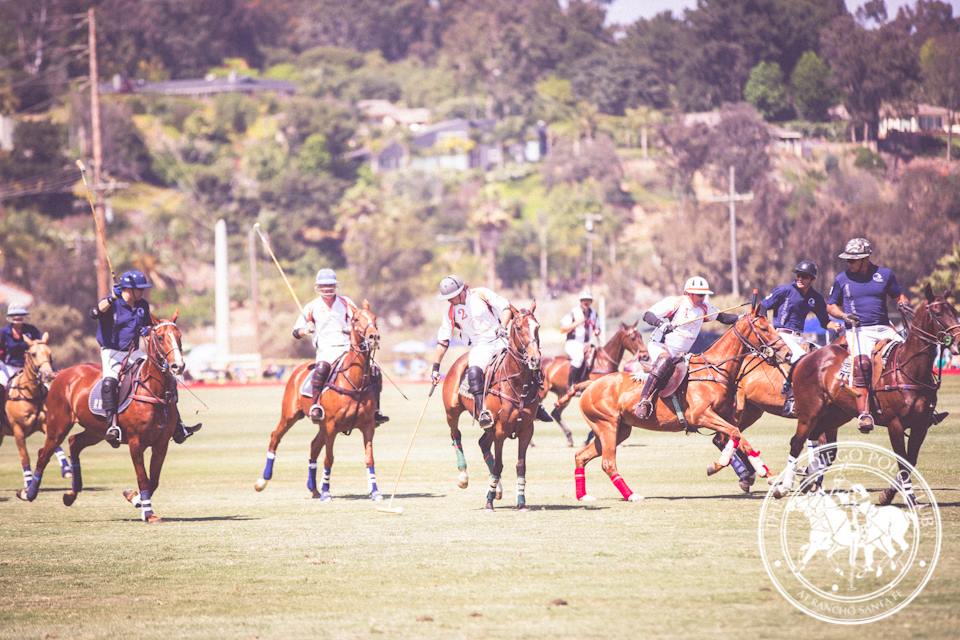 Billy Steta, president of the Mexican Polo Federation was the high scorer of the match chalking up 5 goals, the last of which was the game winner.

Local musicians and brother band, Ottopilot performed for our 7th Chukker After Party!

This last Sunday, July 15th marked the celebration of the Woodford Reserve Polo Classic.  Woodford Reserve hosted VIP members and guests in the Polo Lounge treating guests to an assortment of tantalizing specialty Woodford cocktails.  The lounge was adorned to reflect the brand’s signature colors of rich browns and glowing oranges and was complete with lounge furniture so that VIP guests could watch the action-packed polo matches in the epitome of comfort.

In addition, the San Diego Polo Club and Woodford Reserve teamed up with the Del Mar Race Track.  The Club gave away tickets for Opening Day at the races to anyone who purchased a Woodford crafted beverage.  Woodford Reserve also offered tastings to Sunday’s polo enthusiasts including drinks by the names of Spreckles and Hair of the Horse, names that embody the polo spirit.

Land Rover of San Diego, another sponsor of the 2012 San Diego Polo Season, was also featured last Sunday.  The Range Rover that was on display emanated both polo luxury and comfort and epitomized the ultimate car to tail-gate in on Polo Sundays.

Intermission between polo matches featured the engaging Ballistic Racers Flyball Team.  Flyball is a captivating competition involving two teams of dogs that participate in a relay race involving agility, collaboration, and astounding training.  This is truly a sight to be seen.

San Judas/La Pasion took the opportunity to pull ahead in the fourth and fifth chukkers with two goals scored by Tracee Brunetti and one by Gaston Von Wernich.  In the fifth chukker, Graham Bray scored a goal for Starmeadow/Adeptus.

The second and third chukkers were met with equal talent on behalf of both teams. Between the two chukkers, Mariano Fassetta and Ron Bonaguidi scored one goal each for Hanalei Bay, two points that were matched by Mariano Guteriez of Woodford Reserve.   By the end of the third chukker, Hanalei Bay was in the lead with 5:4.

In the fifth chukker, Hanalei Bay’s Mariano Fassetta answered Woodford’s lead by single-handedly scoring three goals for Hanalei Bay bringing them back into the game.  The fifth chukker came to a gripping conclusion with both teams tied at eight points.

The sixth chukker proved to be the most momentous as both teams exemplified skilled horsemanship and teamwork.  The match began with a goal for Hanalei Bay by Mariano Fassetta.  Mariano Guterriez tied the chukker by scoring a goal for Woodford Reserve.  The action-packed matched came to a close with Fassetta’s goal giving the win to Hanalei Bay with a final score of Hanalei Bay 10: Woodford Reserve 9.

If you missed this cup hosted by Woodford Reserve, join us on September 16 for the Herradura Cup featuring their one-of-a-kind tequila.  This event happens to fall on Mexican Independence day and is sure to be one of the many highlights of the 2012 Polo Season.