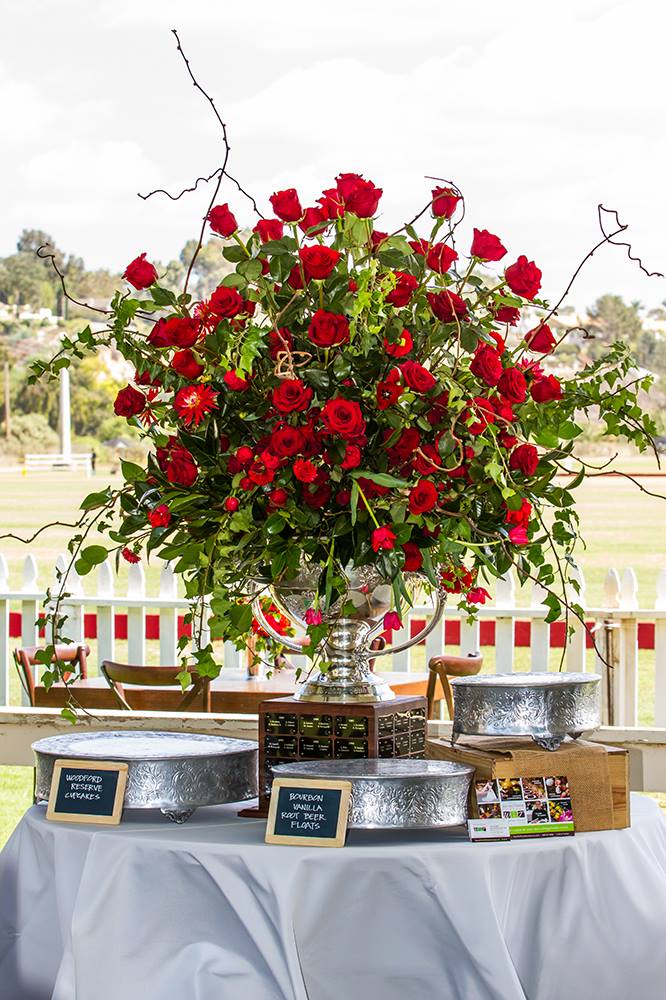 Gates opened at 12:30pm and guests were lined up as early as 9:30am itching to get a good spot to watch the final match at 2pm. Players and VIPs mingled in the Woodford Reserve Lounge and sipped on bourbon infused specialty cocktails as they took awe of the 105 year old Spreckels trophy that was on display with hundreds of beautiful garden and piano roses overflowing the cup. 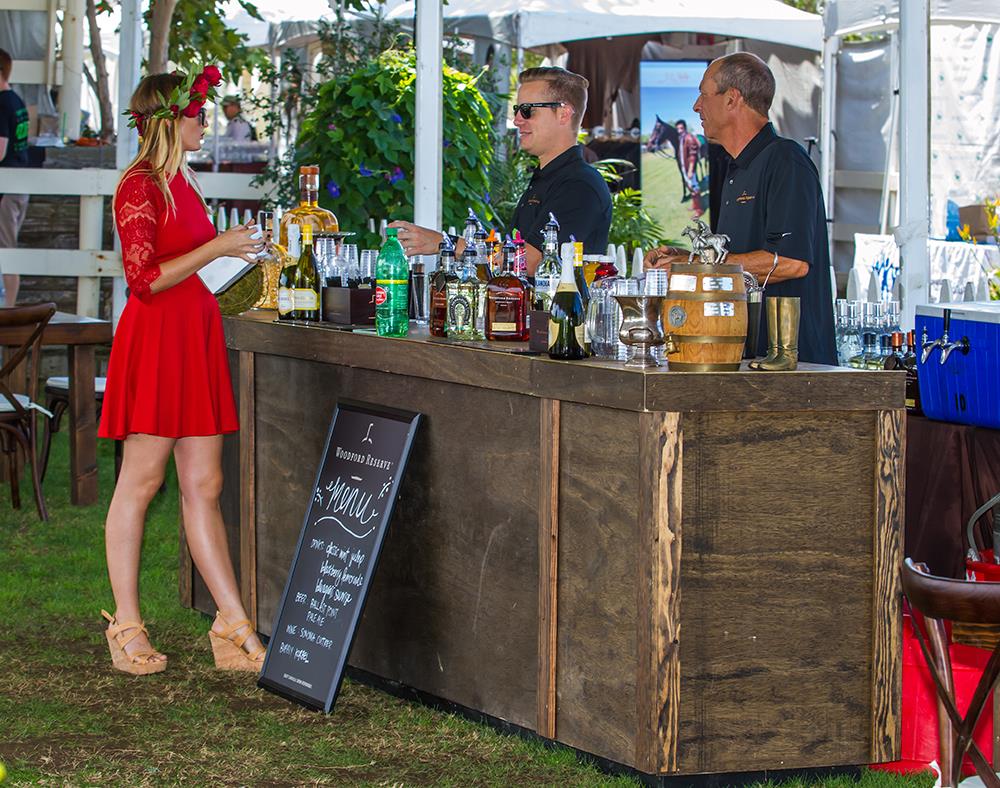 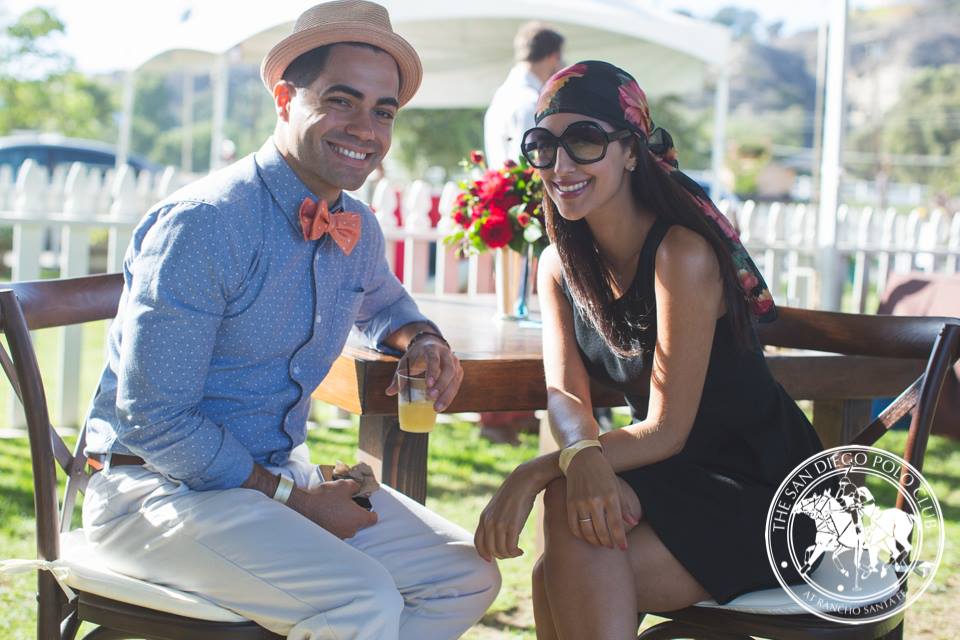 The VIP tent was filled with 500 guests, including players, family, friends, sponsors, and of course, the Heels2Heal guests right in the front row. Over 1,300 guests piled into the venue, dressed to the nines in red accents, hats and chic polo outfits. 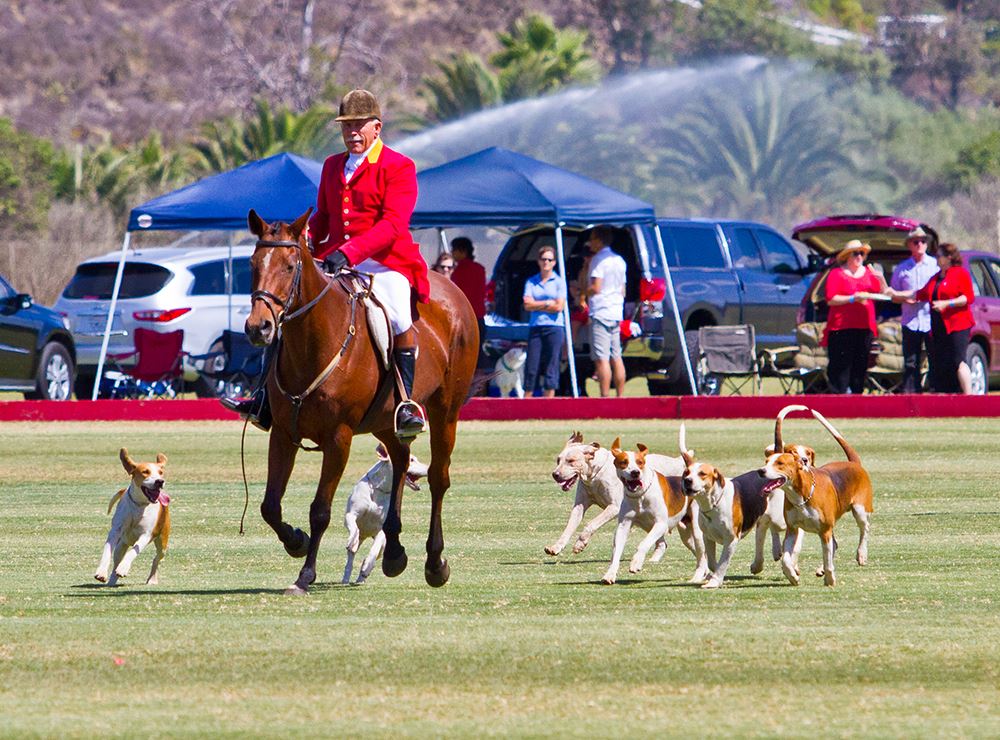 The day started out with a classic demonstration of rider and foxhounds, presented by the Santa Fe Hunt. Established in 1969, the Santa Fe Hunt/West Hills Hounds is a Masters of Fox Hounds Association recognized Hunt located in Temecula, California. They are a diverse group of riders brought together by love of horses, open spaces, country values and riding with a fine pack of foxhounds as they work a scent. The San Diego Polo Club is honored to welcome back Terry Paine and the Santa Fe Hunt every year.

Next up was the highly anticipated fashion show presented by Heels2Heal chair and polo player, Sonya Berg the Zen Fashionista.

After the fashion show, guests were encouraged to grab a drink at the bar or get a bite to eat and settle in for the final match of the season, the USPA Spreckels Cup Finals. 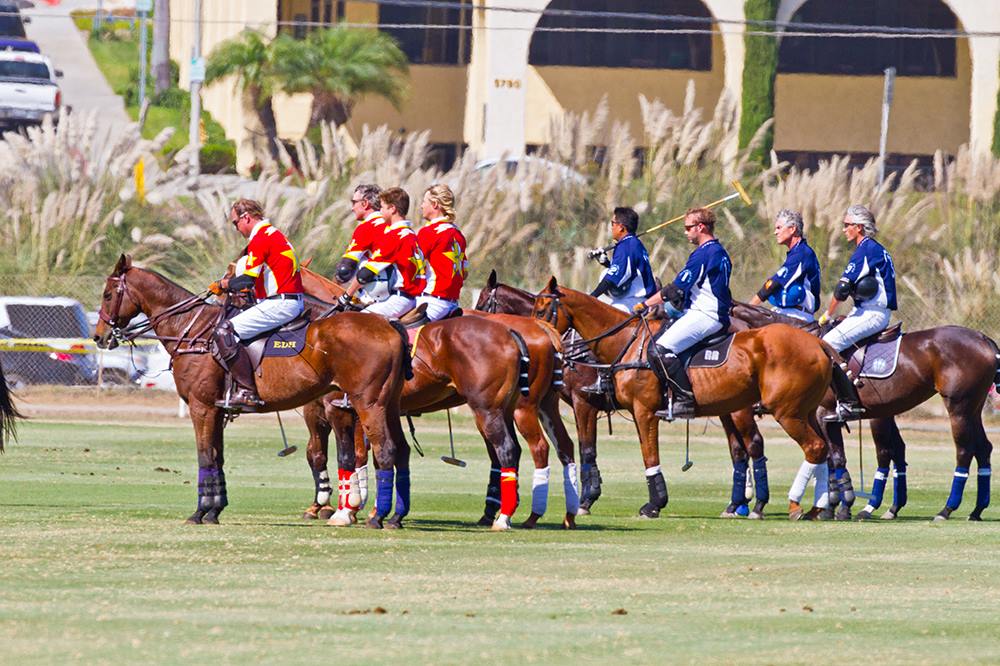 Five teams had been competing for the chance to play in the 105 year old tournament, The USPA sanctioned Spreckels Cup. On September 28th, 2014 the top two teams fought it out for the title of Spreckels Champions. After weeks of
competing for a spot in the final game, Starmeadow/Roseville Motor Car and Twin Palms took the field for the final tournament of 2014. 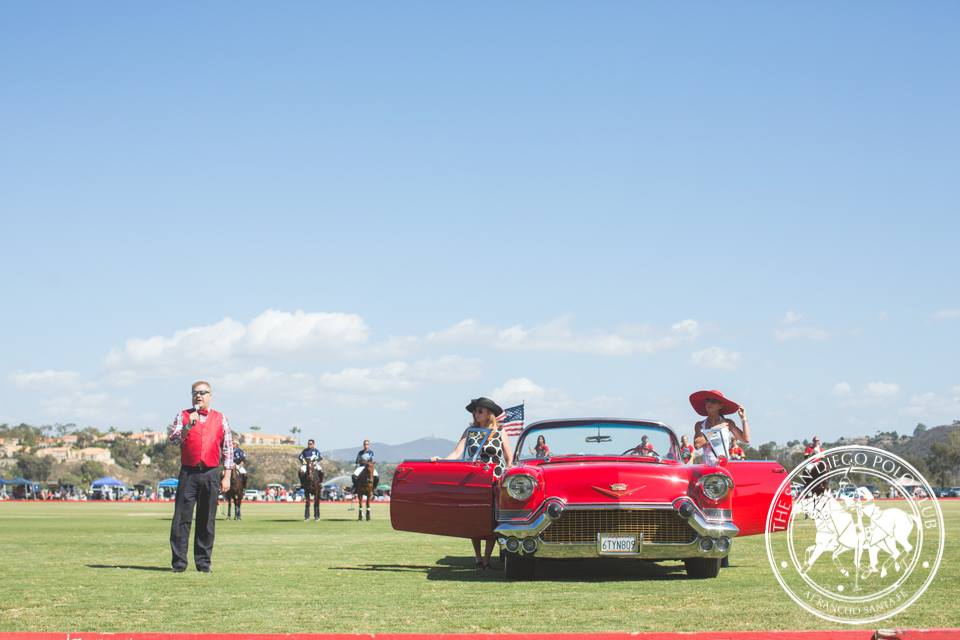 Anthony Ballard did the honors of singing the national anthem during our Opening Ceremonies. With over 25 years’ experience, Anthony’s diverse background spans opera, musical theatre, non-musicals, tap, jazz and ballet. Anthony is an active member of the San Diego Opera’s Core Chorus and has appeared in over 50 San Diego arts productions since moving to the area in 1993.

After the anthem, Suzanne Brown from Woodford Reserve did the honors of throwing in the ceremonial first ball and starting off the first chukker! 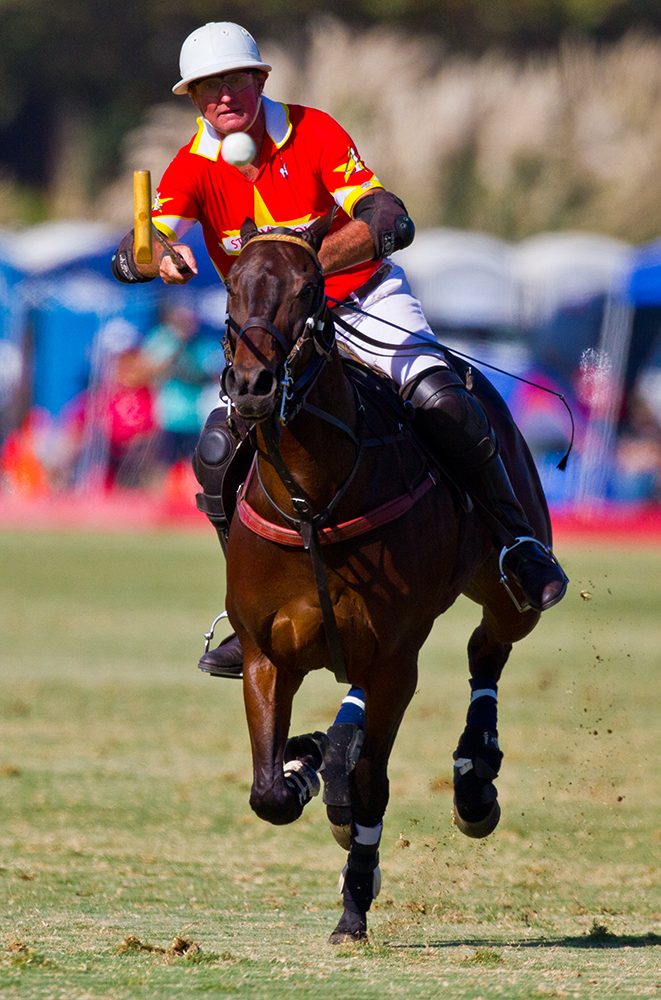 The first goal of chukker one was scored by Graham “the big guns” Bray for Starmeadow. Twin Palms’ Gaston Von Wernich was right behind him, scoring for his team. Playing for the trophy, Von Wernich scored the next three goals in chukker two. 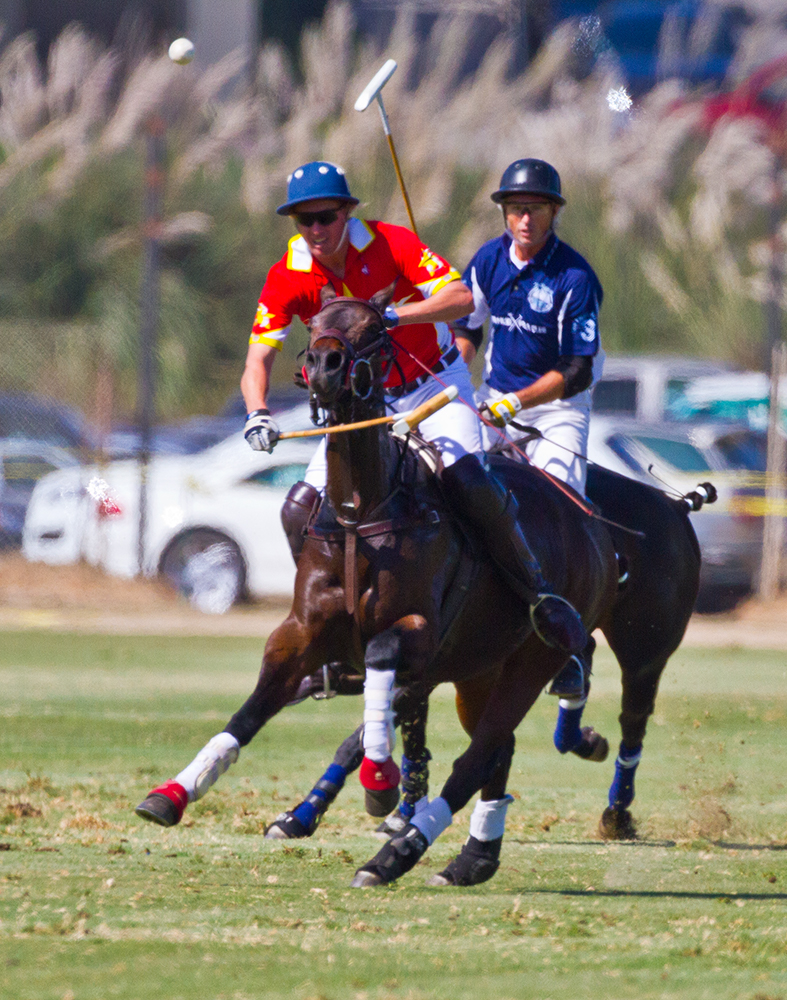 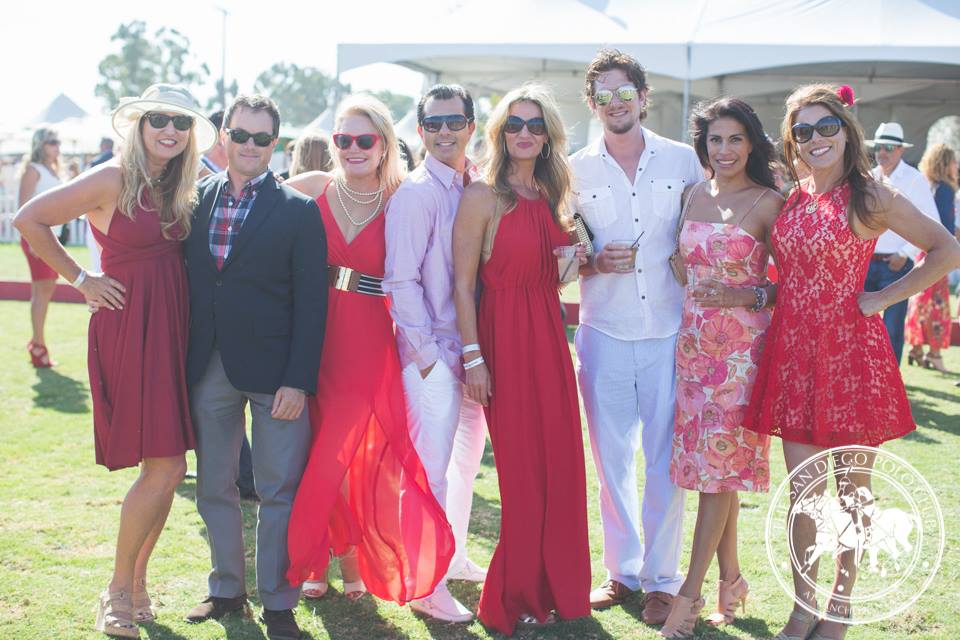 During the traditional “Pretty Woman Divot Stomp,” guests enjoyed a sample of Korbel California Champagne as they mingled with friends and replaced the divots that were kicked up by the horses during the first half of the game. 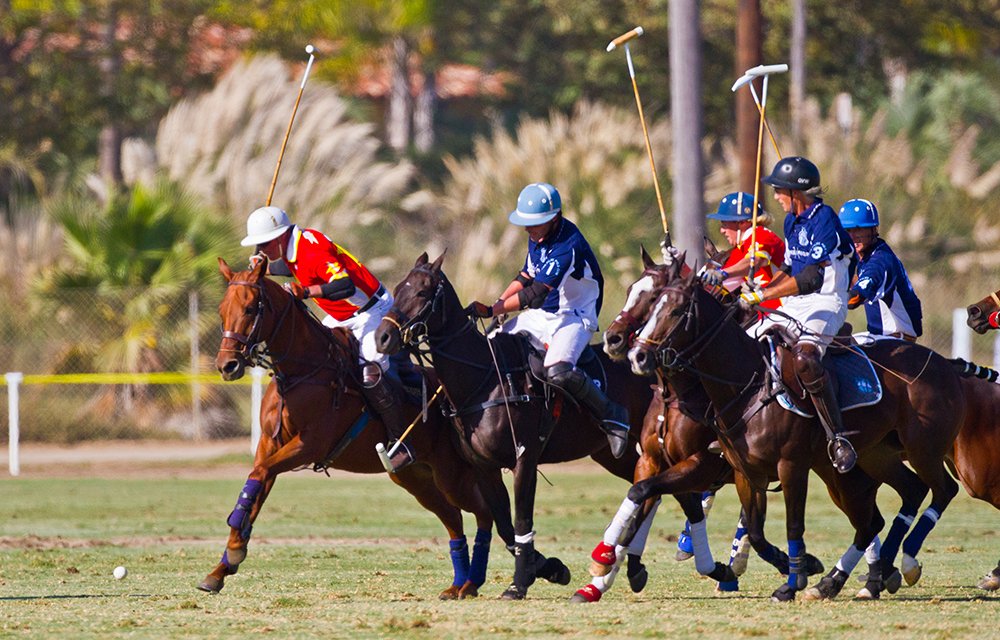 Like chukker four, chukker five belonged to Twin Palms. Alvaro Tadeo scored first for his team. Robertson picked up the second goal. Going into the last chukker, the score was Starmeadow 4 / Twin Palms 10. 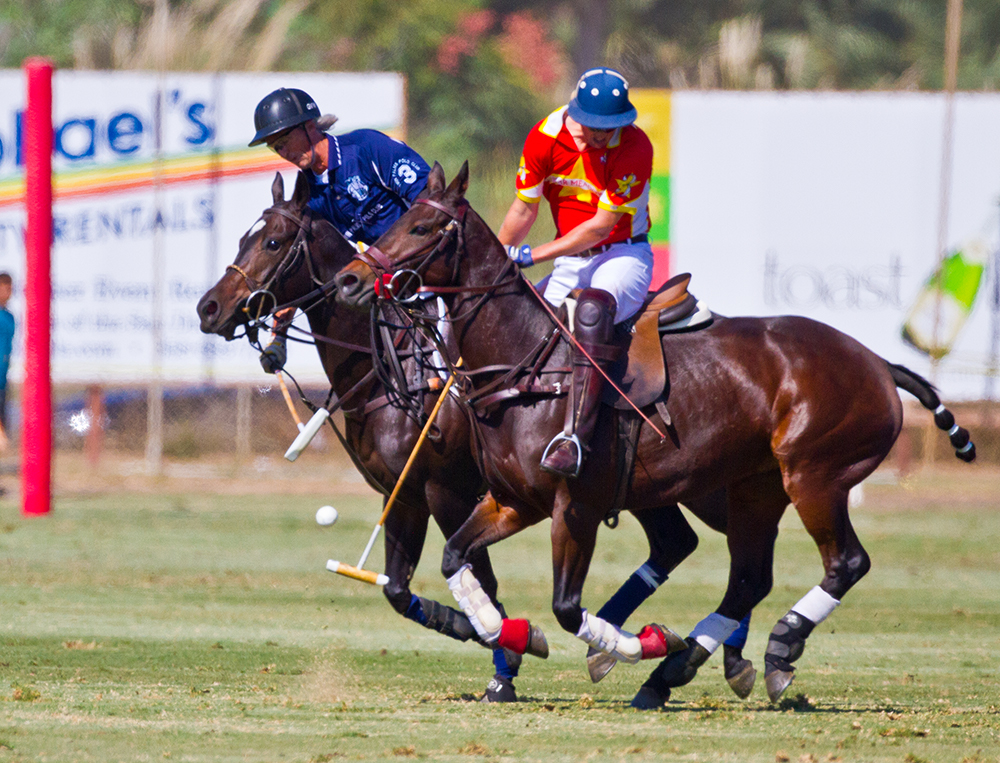 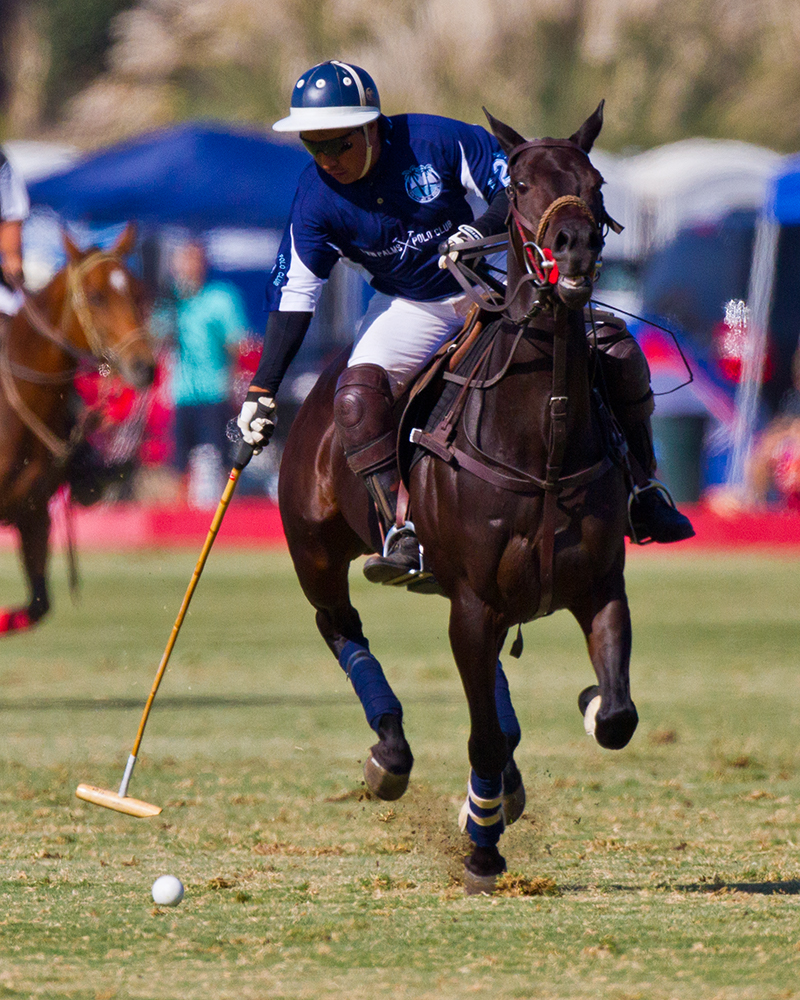 The final goal was scored by Tadeo of Twin Palms. Adding in team handicaps, Starmeadow ended with nine goals. Though Starmeadow fought hard, Twin Palms was on fire. They came to win and with eleven goals, they did just that. 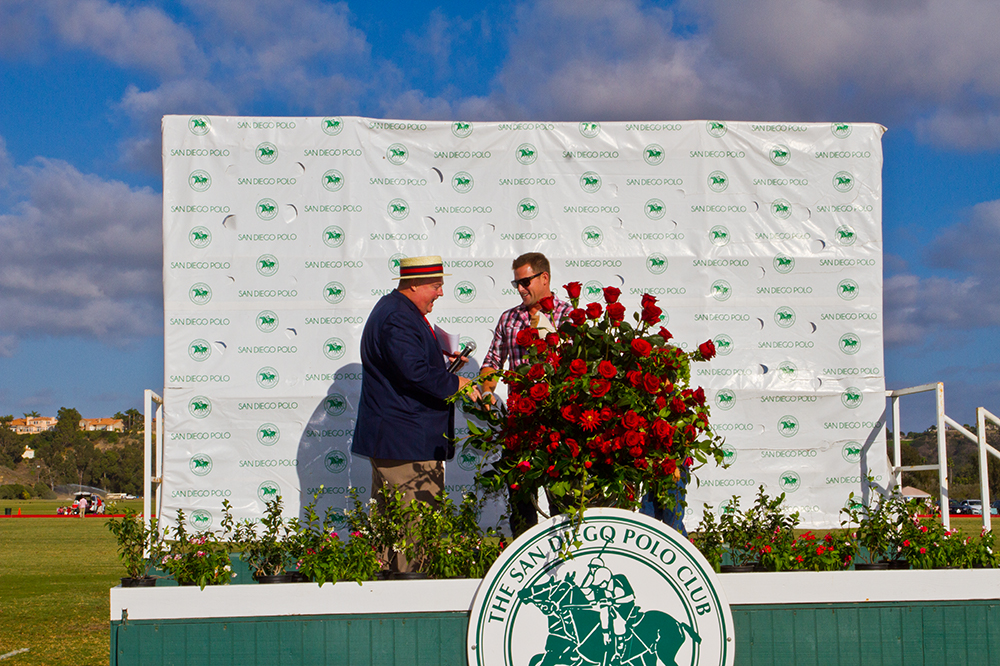 Both teams joined together on the trophy deck for the Trophy & Awards Presentation. First off was the most improved player award, which was awared to Virgil Kyle by previous president and founding member, Ron Bonaguidi. Kyle has excelled in his skill level in 2014. 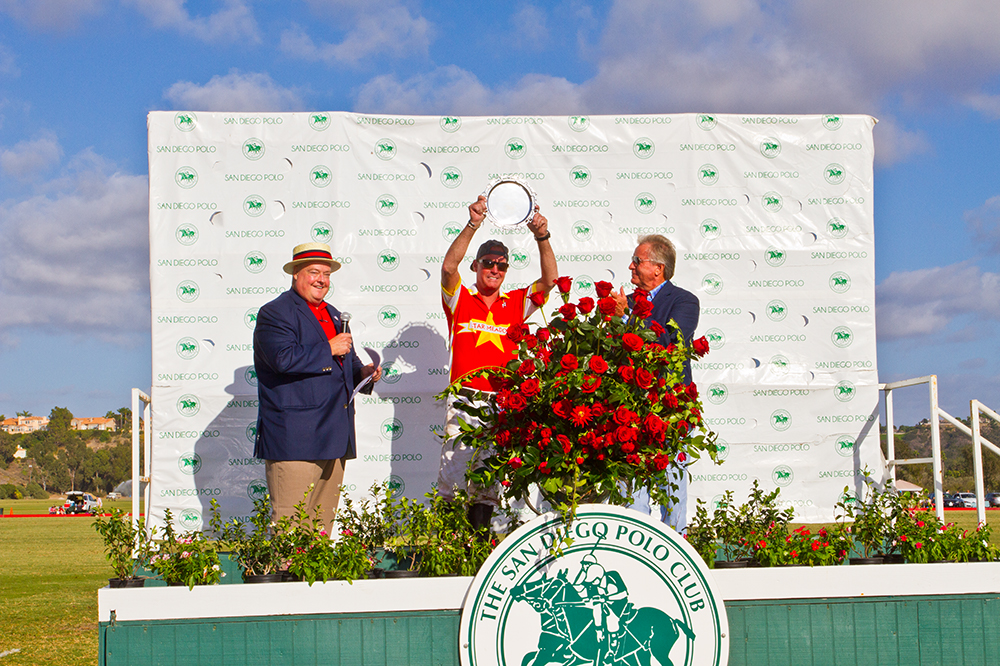 Second was the sportsmanship award, which went to one of our newest members, who has displayed courtesy and sportsmanship to his fellow players. Eric Hammon was the recipient of this great award. 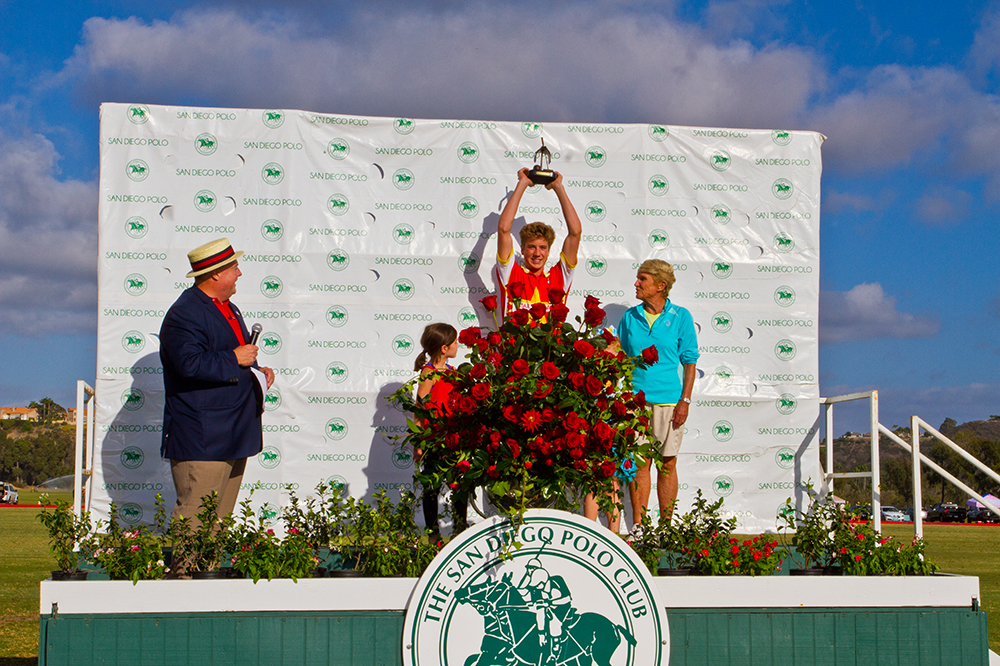 Our founding father, Willis Allen was very instrumental in encouraging young players to get involved in the sport of polo. The San Diego Polo Club created his namesake award to honor Willis and congratulate the best all-around young player under 30 based on horsemanship, sportsmanship and playing ability. Judy Collins, daughter of Willis Allen, presented this award to 17-year old Colton Bancroft. 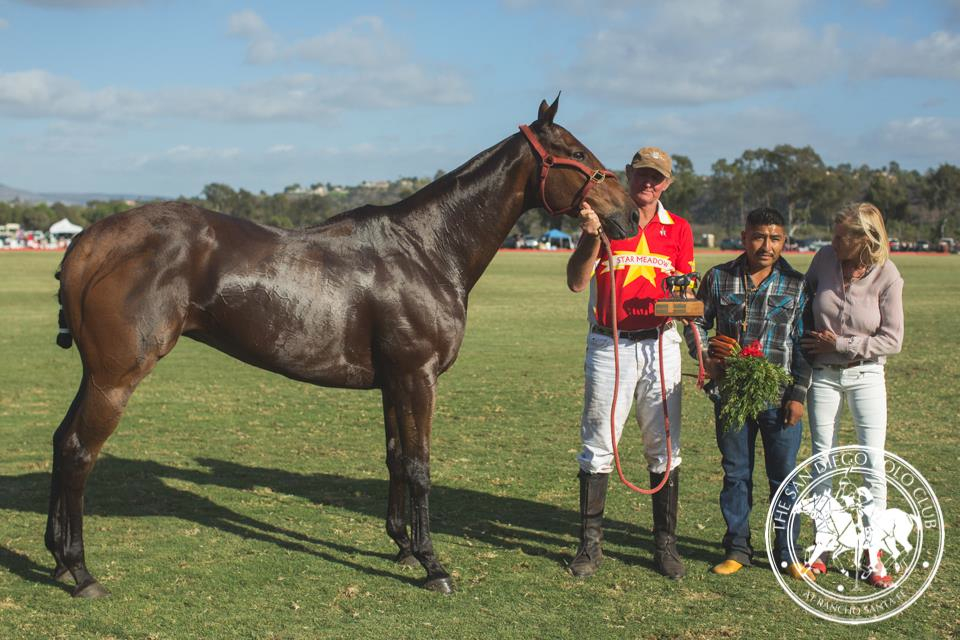 Out of the 48+ horses played in Sunday’s polo match, the best playing pony is just that– the best pony out there. Gail Greggson of the California Thoroughbred Breeder’s Foundation presented the trophy to Graham Bray for his horse P1. This horse has won 4 best playing pony awards in the last two years! 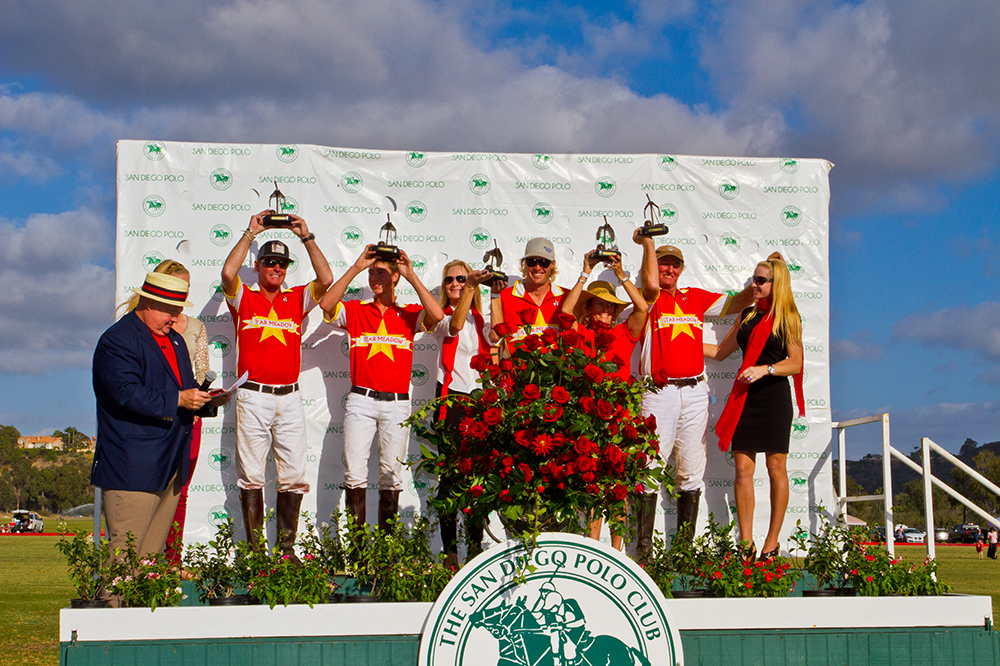 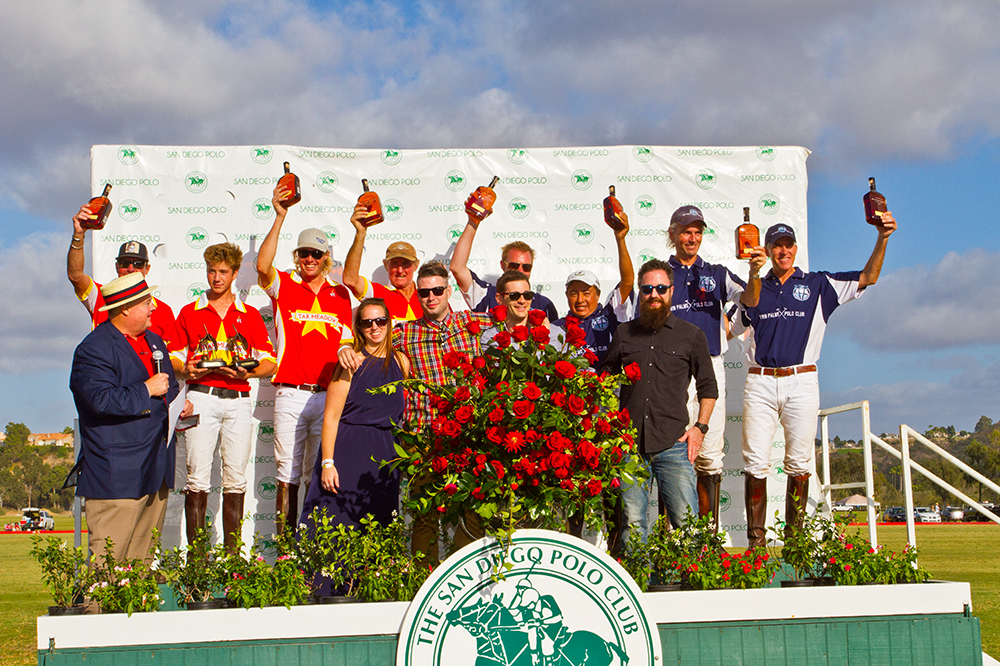 All of the players were then welcomed onto the stage and everyone was gifted with a nice bottle of Woodford Reserve, a small-batch straight bourbon distilled in central Kentucky. The distillery itself is a national historical monument! 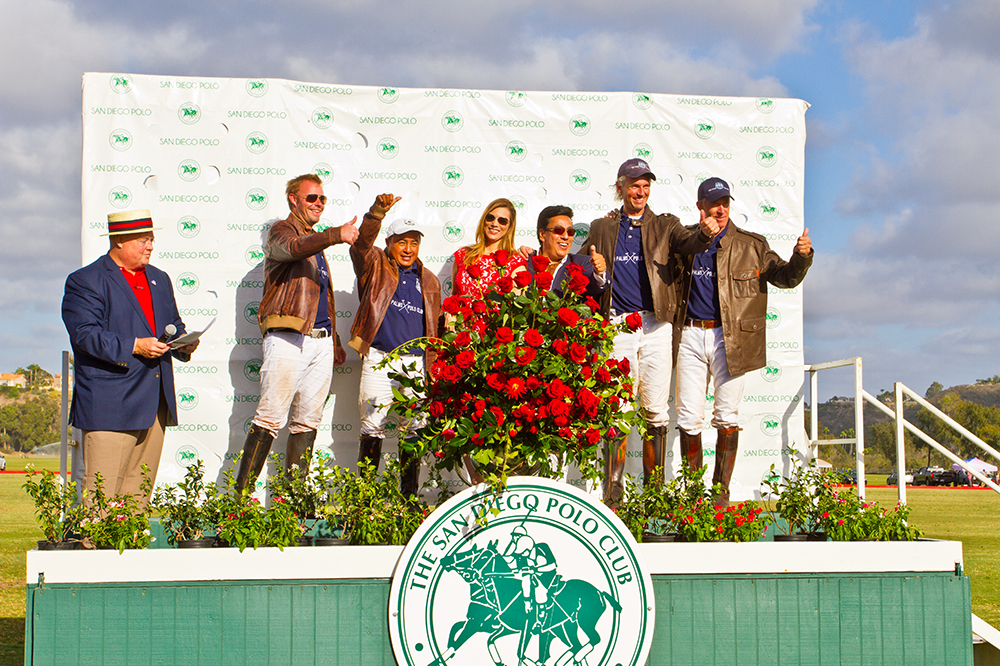 Jose Luis & Lovie Rocha, owners of  JL Rocha, have been designing and manufacturing handmade leather shoes & jackets for over 3 generations in Mexico and now they are in the United States. Lovie & Jose Luis presented each of the winning players with a fine lambskin jacket from their collection completely made by hand. 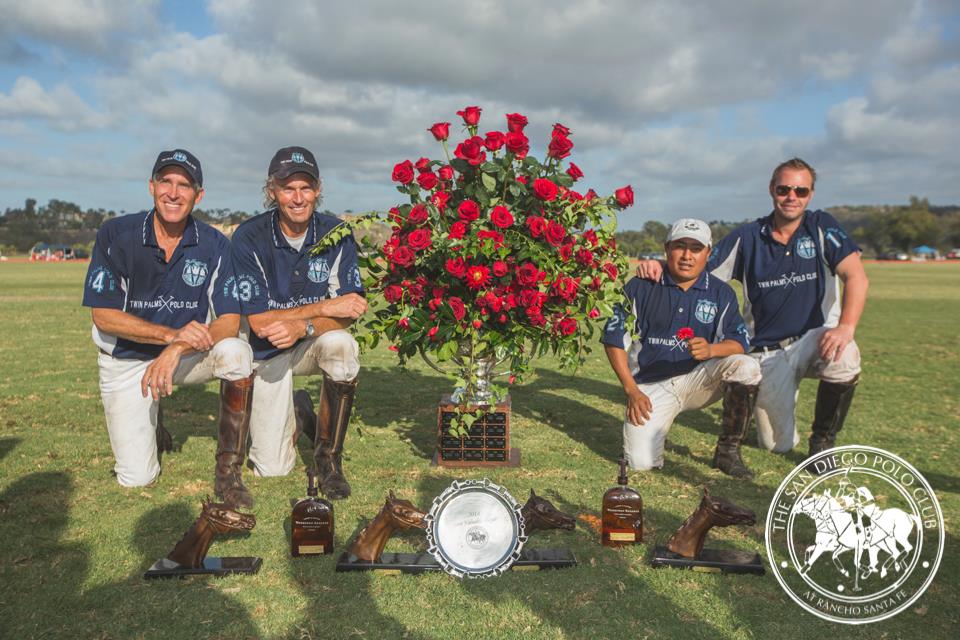 Scott Walker, USPA Lieutenant Governor for Southern California, presented the winning teams with their trophies as well as awarded Most Valuable Player of the game to Gaston von Wernich! 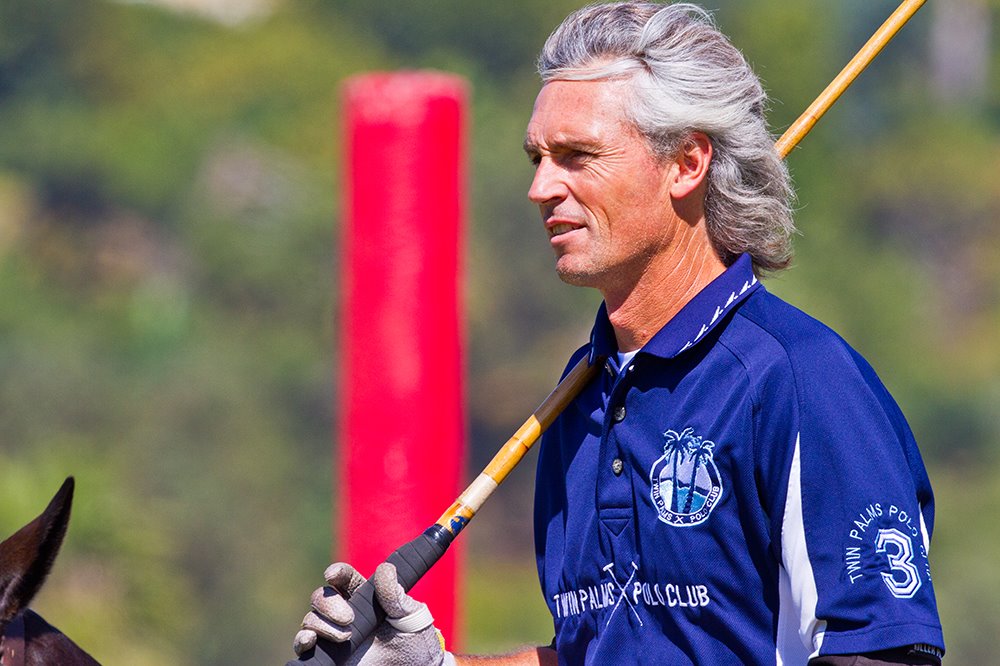 Guests stayed until dark, dancing and partying with polo players and members. DJ Beatnick kept the energy up and rocked the beats for one of the best after parties in history!

Photos by Jim Bremner & Topher Riley. To see more, visit us on Facebook.com

Check back for more fun announcements.

To attend the fashion show and Closing Day at the San Diego Polo Club, you need to purchase tickets online here.