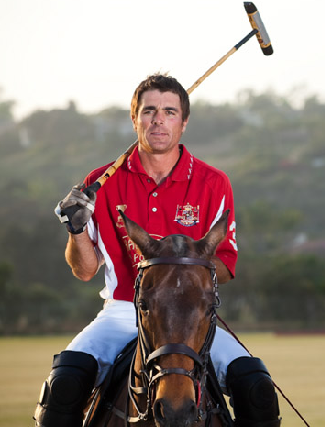 He has an impressive career, winning the USPA Spreckels Cup 6 times and playing polo all over the world.  He was on the cover of San Diego Polo Club Magazine in 2010 demonstrating a great offside neck shot.

Last year, one of his best horses, Paris, won Best Playing Pony in the USPA Spreckels Cup.  Out of the 48 horses we saw play in the Spreckels Cup Finals last October 3, Paris was the best horse on the field.  And you know what they say… “a polo player is only as good as his horse.”

As a player who leans on rituals to calm his nerves and bring him luck before matches, Mariano has abandoned his previous habit of wearing only red socks and the same underwear each game for a “left boot on first, left kneepad on first” regime.  (Thank goodness!)

Mariano, or known to us as “Fassetta,” loves to play music in his spare time, attend concerts, and spend time with his wife and friends.